We present the MyoTilt target selection method for smartwatches, which employs a combination of a tilt operation and electromyography (EMG). First, a user tilts his/her arm to indicate the direction of cursor movement on the smartwatch; then s/he applies forces on the arm. EMG senses the force and moves the cursor to the direction where the user is tilting his/her arm to manipulate the cursor on the smartwatch with minimal effort, by tilting the arm and applying force to it. We conducted an experiment to investigate its performance and to understand its usability. Result showed that participants selected small targets with an accuracy greater than 93.89%. In addition, performance significantly improved compared to previous tilting operation methods. Likewise, its accuracy was stable as targets became smaller, indicating that the method is unaffected by the “fat finger problem”. 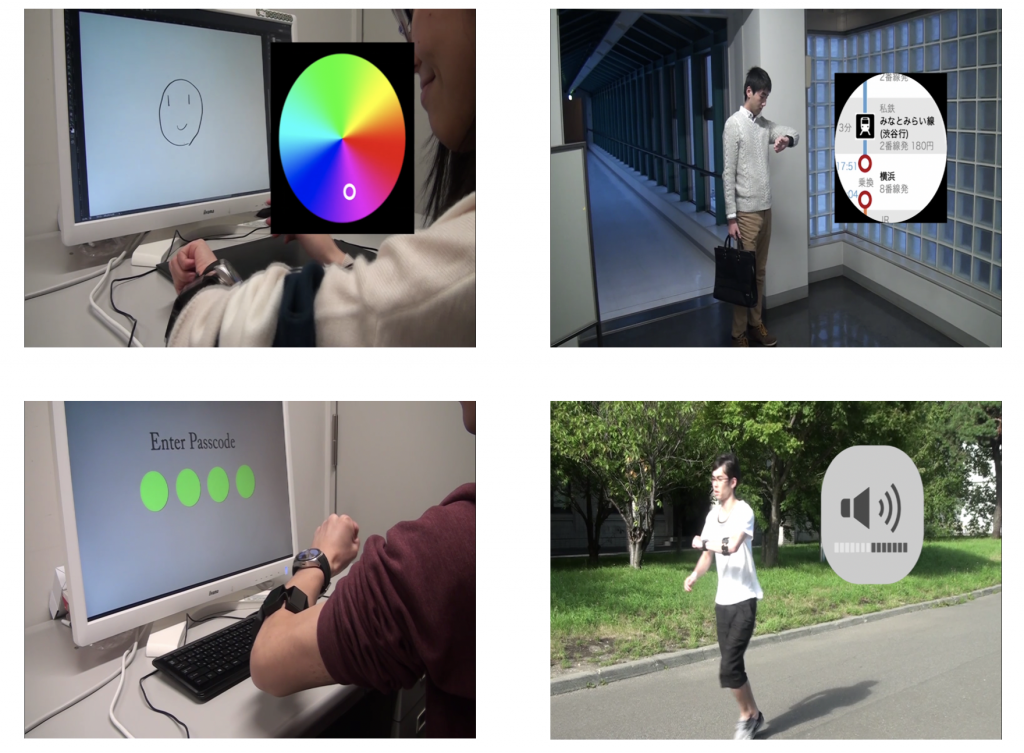 Touch operation on mobile devices is affected by a fat finger problem, in which displays are occluded by a user’s finger, making precise operations difficult. As a result, there have been researched many alternative method; this research focuses on the “tilting operation”. Tilting operation shows a significant level of performance, but there are also significant limitations: it requires large movements of a user’s arms, and the display is on the backside of the arm, making it difficult to see. In addition, a user needs to move his/her elbow to move the cursor, which is sometimes physically difficult. 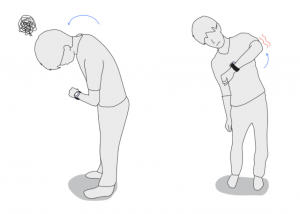 Concept of our method

We use Myo gesture control armband (EMG sensor). In MyoTilt, the operation direction is determined by tilting the device, which is obtained from the acceleration sensor. The unit vector in the operation direction is calculated based on the strain in the arm, measured using EMG. To calculate this value, the source signal must be acquired from Myo at 100Hz for eight channels; we use the RMS (Root Mean Square) value during 100 data and the total value is taken as the “myoelectric potential.” MyoTilt measures myoelectric potential for 10 seconds. Average value will be used as a minmum myoelectric potential below the threshold value, the value is 0 px. And at the maximum myoelectric potential (127×8=1016), the value is 240 px (moved from the center of the screen to the screen edge). Within this range, the value corresponds to the muscle power applied. 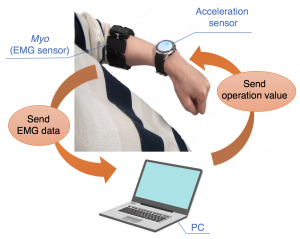 [1] Hiroki Kurosawa, Daisuke Sakamoto and Tetsuo Ono. MyoTilt: A Target Selection Method for Smartwatches using the Tilting Operation and Electromyography. In Proceedings of the 20th International Conference on Human-Computer Interaction with Mobile Devices and Services (MobileHCI ’18), ACM, Article No.43, 2018. [link]

This work was supported by JSPS KAKENHI (Grant-in-Aid for Scientific Research on Innovative Areas) Grant Number 26118006.

Hiroki Kurosawa is a graduate student at Hokkaido University. He leaded this research project. His interests are Interaction Design and Bio signals.

Tetsuo Ono is a Professor at Hokkaido University. His research interests include robot informatics, ambient intelligence and smart environment, human-robot interaction, human-agent interaction, a computational model of emotion, evolution of languages and the theory of mind.